Junacon VII is now officially published and the entrance is free for the whole weekend. More details can be found in Finnish here. There will be a tutorial game of 1830 for three brave and quick souls. Details for that game and other prearranged games can only be found from the forum.

The seventh annual Junacon arrives to near vicinity of Kupittaa (Turku) train station. The event will be held at Sparkup located at Tykistökatu 4. The gritty details of the event have not yet arrived to the press but according to the rumors from a trusted source the event might be free of charge this year. The details will follow as soon as we know. 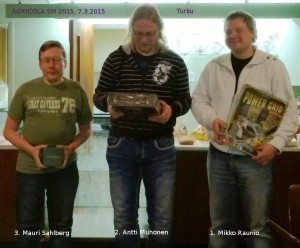 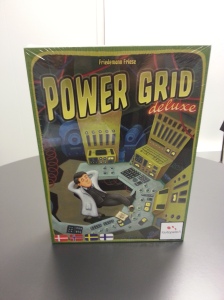 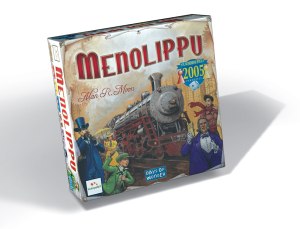 The sixth Junacon is again held in Turku. This time the location is Rientola, sports center/house for Turun Kisa-Veikot. The center is located at Pulmussuonkatu 86, 20360 Turku. The house has ”Rientola” written on its side at large letters. You can reach Rientola with bus number 13 towards Kärsämäki or by car. The entrance to the house is located at the inner courtyard. Parking spaces can also found from the inner courtyard.

The fourth official Finnish Championships in Ticket To Ride were held on 13th of April at T-Talo Turku. There were 15 contestants in total and after three preliminary rounds of Ticket To Ride the results were as follows:

Ticket To Ride is a family game but the age difference between the youngest player Lumo and the adult players clearly shows in the results. The second under age player Taika managed a little better and was 11th. She made a come back on the third round of prelims but was still unable to make it to the semis and to the final this year. The reigning champion from the fourth championships in 2012 Tommi Lantta wasn’t present but unsurprisingly the two other finalist from 2012 Iraklis Grous and Maria Kivilahti managed to make it to the semifinal round.

The semifinals were played with Ticket To Ride Europe this year and the first semifinal table hosted Sameli Valkama, Lars Törn,  Iraklis Grous and Mikko Raunio.

Sameli won and Mikko was second. Iraklis managed to grab third place leaving Lars as fourth. The semifinal game was pretty even and uneventful as all of the players avoided risky and flashy moves.

This semifinal game was anything but even from the start. At the beginning of the game Taneli was left alone on the east  while a short and bloody battle for Iberia peninsula commenced at the other side of the board. The others advanced finally to the east but it was too late for them to catch up with Taneli who easily won the game. Petri was second.

The final game was played on Ticket To Ride Nederland. This was quite a new map for the most of the contestants, for example Petri’s first game on this map was played an hour before the tournament started. Despite the fact the players hadn’t had that much experience on the map in question the final was very even until the end.

At the last round all of them still had chance to win the game. The discussion around the table was quite open concerning chances of Mikko, Petri and Taneli. All of the players knew that the deck contained two good tickets for Petri and Mikko and at least one good ticket for Taneli. Others also assumed/knew that there were good tickets for Sameli as well. The last round started with Petri taking tickets and failing to find either of the two he needed to win the game and earning him -10 points for incomplete ticket. All of the three others decided not to take tickets and the scores were counted. Petri’s failure with ticket cost him the third place and let Taneli to beat him for the third place. Mikko was second and Sameli won the game. The two topmost tickets on the deck would have given Mikko enough points to catch and pass Sameli provided that Sameli would not have taken tickets afterwards.

Sameli was also the best overall player in the tournament without losing a single game!  We have high hopes to have a Finnish World Champion in Paris at September. Congratulations for all finalist once more.